by Kristin Dittus in Uncategorized 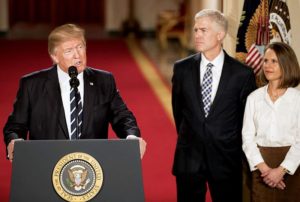 After his nomination on January 31, 2017, Colorado attorney Neil Gorsuch was confirmed by the Senate on April 7, 2017.[2]Gorsuch, age 49, is the youngest sitting Supreme Court justice since Clarence Thomas.[3] In February 2016, U.S. Supreme Court Associate Justice Antonin Scalia died, leaving a vacancy on the highest federal court in the United States. Article II of the U.S. Constitution requires the president nominate justices to the Supreme Court, subject to the “advice and consent” of the United States Senate.[4] President Barack Obama, a Democrat, nominated Merrick Garland to fill the vacancy. U.S. Senate majority leader Mitch McConnell, a Republican, citing the fact that the presidential election cycle having already commenced made the appointment of the next justice a political issue to be decided by voters, refused to bring the Garland nomination to the Senate floor for a vote. McConnell’s action held the Supreme Court vacancy open through the end of President Obama’s tenure.

On January 31, 2017, newly-inaugurated President Donald Trump announced his selection of Judge Neil Gorsuch for the vacant position of Associate Justice, and transmitted this nomination to the Senate the following day. After hearings before the Senate Judiciary Committee, the nomination was sent to the Senate floor on April 4, 2017. When nominated, Gorsuch was serving as an active judge on the United States Court of Appeals for the Tenth Circuit, to which he had been appointed by President George W. Bush and confirmed without opposition in the Senate. Democratic Senators then proceeded to filibuster Gorsuch’s nomination, after which Republicans invoked the “nuclear option“, eliminating the filibuster with respect to Supreme Court nominees.[5] On April 7, 2017, the Senate confirmed Gorsuch’s nomination to the Supreme Court with a bipartisan 54–45 vote, with three Democrats joining all the Republicans in attendance. Gorsuch took office in a private ceremony on April 10.[6]

Gorsuch clerked for Judge David B. Sentelle on the U.S. Court of Appeals for the D.C. Circuit from 1991 to 1992, and then for U.S. Supreme Court Justices Byron White and Anthony Kennedy, from 1993 to 1994. From 1995 to 2005, Gorsuch was in private practice with the law firm of Kellogg, Huber, Hansen, Todd, Evans & Figel. Gorsuch was a Deputy Associate Attorney General at the U.S. Department of Justice from 2005 to his appointment to the Tenth Circuit. Gorsuch was nominated to the United States Court of Appeals for the Tenth Circuit by President George W. Bush on May 10, 2006, to replace Judge David M. Ebel, who took senior status in 2006.

He holds a Bachelor of Arts from Columbia University, Juris Doctor from Harvard Law School, and Doctor of Philosophy in Law from University College, Oxford.[7][8]

For the Full Articles on Wikipedia, please follow these links:

Leisure Activities May Slow the Effects of Age-Related Cognitive Decline

Modifications Enhance Safety for Those with Diminished Capacity

News from the 2017 Heckerling Institute